Radeon 5450: Triple Monitors on the Cheap

The ATI Radeon HD 5450 is the cheapest 5-series card, but it packs quite a punch for its low price. Namely, it is also the cheapest card to support three monitors and ATI Eyefinity.

I purchased this card to replace a semi-broken Radeon x1600 (the fan stopped working). My model, made by Sapphire, features a fanless low-profile design, perfect for an HTPC. With 512MB of DDR3 RAM aboard, it's also good for lighter gaming (games being limited by the relatively low power of the GPU). All in all, this is a pretty solid lower-midrange card.

I have one 22" monitor and two old 15" LCD monitors. The 15-inchers were basically salvaged (if I hadn't taken them, they'd be lying in some landfill). Since my desk does not fit all 3 monitors and my speakers comfortably, I had to place one of the monitors atop a speaker. However, despite this somewhat asymmetrical placement, the setup is quite usable. 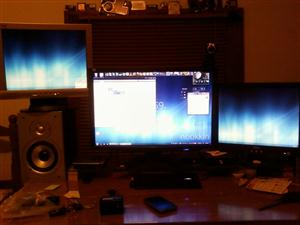 The productivity boost is quite apparent with 3 monitors, although not as pronounced as switching from 1 to 2. I use my leftmost 15" monitor as a "communication center" – that's where I place my chat windows and the like. The large 22" monitor is in the center for my main focus, and the 15" one on the right is for entertainment (i.e. watching an online video while doing other work).

The ATI Eyefinity website states that in order to use more than two monitors with their cards, one of the monitors must be connected through the DisplayPort connector. (DisplayPort is a new, open standard competing with DVI and HDMI.) Sadly, most monitors nowadays don't come with DisplayPort connectors, and passive electrical adapters (like those DVI-to-VGA adapters) simply do not work.

Why is this? Is ATI trying to push DisplayPort to consumers and force them to upgrade? No. There is actually a simple explanation: typical video cards only come with two timing generators for their DVI/VGA signals. (DVI-I ports also include analog capability.) Thus, with 3 monitors and 2 clocks, it's only possible to control two at a time. Using a standard passive DisplayPort adapter makes the video card see the monitor as a DVI or VGA device.

The solution? An active DisplayPort to DVI adapter, which actually converts the DisplayPort signal into a DVI signal with its own timing, using a small circuit inside the adapter itself. These cost around $30 each, but will allow you to use three monitors and Eyefinity.

The latest version of Catalyst is a noticeable downgrade from the last one. The user interface is terribly designed – random scrollbars pop up everywhere and it is quite difficult to find the settings I need. (It took me a long time to find the Avivo color controls, which were buried in a "Configure..." context menu on one of the smaller monitor icons on the "Desktops & Displays". It doesn't help that there's also a "Configure..." context menu on the larger monitor icons above, which takes you to a different place. WTF, ATI?)

I miss the good old days of tabbed ATI control panels on Windows XP, or heck, the older Catalyst and the initial big-icon NVIDIA Control Panel. Why graphics manufacturers come up with an excellent "new" control panel design and then totally botch it up in subsequent "revisions" is beyond me.

Despite meeting the technical requirements for 3 monitors, I am unable to get all of them to work on Windows XP. It seems like Catalyst is not allowing more than two monitors per card. Obviously, Eyefinity is not supported under Windows XP – I did know that, but I had no idea it meant I couldn't use my 3 monitors.

The Radeon HD 5450 is a lower midrange card, thus its performance is nothing stellar. Unlike my old Radeon x1600, however, this card has more RAM and supports DirectX 11, the latter of which allows me to run Crysis at max settings should I so desire. Windows rates it a 6.1 for gaming graphics and 4.6 for desktop graphics, making my video card responsible for both my lowest and my highest scores.

Eyefinity is ATI's multi-monitor technology that combines multiple single monitors into one large one, making it perfect for multi-screen gaming. In order to work properly, however, all monitors must be set to the same screen resolution.

All in all, the ATI Radeon HD 5450 is a very solid lower midrange card, offering great bang for the buck. The card works in standard PCs as well as low-profile HTPCs, and is perfect for media centers, casual gamers, and basic business use (i.e. 3 monitors). And for the $54 I paid for it, I'd say it's one of the best cards available for that price.

K
Could you please post a link to the active DisplayPort to DVI adapter. I want to ensure I buy the correct one. Thank you!
Options: Reply | Quote | Flag / Report

Colin Brice
I have an ATI Radeon HD 5450 graphics card that has three ports: VGA - HDMI* - DVI (*this seems to be refered to as a display port in some places?).

I have been running two vga monitors without a problem using the VGA port and the DVI port with an adaptor.

I have now tried adding a third monitor to the HDMI/Display Port using just a HDMI-DVI cable.

When I then use the control panel in Windows 7 to detect the monitors, it does show all three, however it will only allow me to connect 2 of them at any given time.

Not sure where I am going wrong, whether it is a driver issue or whether I need an active adaptor for the HDMI cable (although it will work on that lead, just not at the same time as the other two monitors!)

nookkin
@Colin Brice :
HDMI and DisplayPort may look similar, but they are in fact very different.

HDMI is electrically compatible with DVI (which is why you can use those $3 adapters to convert between the two). DisplayPort is a completely separate standard that is usually backwards-compatible with DVI/HDMI via an inexpensive adapter by routing DVI signals through the wires.

The reason you can't use 3 monitors on your card -- or, for that matter, use 3 monitors on a DP card with a passive DP-to-DVI adapter -- is that it only has 2 clock generators for the outputs, which means you can only use 2 at a time. (If DP is passively converted to DVI, one of these is used as well, since it's effectively acting as a DVI port.)

However, DisplayPort has its own separate clock generator, and if you use an active adapter (which accepts a true DisplayPort signal and outputs DVI/HDMI/VGA), neither of the 2 "legacy" generators is used. This frees both of them up and allows you to use 2 "legacy" monitors.
Options: Reply | Quote | Flag / Report

Jaqueline
Any adapter can't work, needs to be active.And yes, there are active adapters for 5 bucks.Active means that have a DAC, that convert your digital signal to analog signal.Is the only way that can work(in other way, your video card needs to be capable of send analog signal throug the DP).The adapter that you show on the video, IS active.Thats dont mean that needs to be a expensive adaptor.
Options: Reply | Quote | Flag / Report

nookkin
@Jaqueline I am using an active adapter.

You're partially right about the DAC -- however, DP-to-DVI active adapters have no DAC since there's no analog signal.

I actually added a 4850 to my system as the primary card, and I noticed that there is far less sync lag -- I can read my POST screen now.
Options: Reply | Quote | Flag / Report

Roan
Hi all,
I have the Radeon HD 5450. It hasn't a Display Port on it. It has DVI, VGA and HDMI. Does it supports 3 monitors. To do ATI Eyefinity you must have a Display Port right?
Options: Reply | Quote | Flag / Report

nookkin
@Roan You must have the DisplayPort version if you want 3 monitors from the same card, as outlined above. You can use any 2 of the ports at the same time.

Depending on your needs, it may be cheaper to exchange for a triple-monitor card or to just add another card to your system (if you have extra PCIe slots).
Options: Reply | Quote | Flag / Report

Pmugi
What @Colin Brice and @Roan mean is just the same as my experience with a Sapphire HD Radeon 5450 card. The card has ports clearly labelled DVI, VGA and HDMI. I can use the HDMI alone to my Lg screen without any issues, however, adding 2 more screens via VGA adn DVi(DVI-VGA connector), I cannot use the 3 monitors simultaneously. Is the HDMI port also a displayPort?
Options: Reply | Quote | Flag / Report

nookkin
@Pmugi HDMI and DisplayPort are completely different even though the connectors look similar. You can only use 2 monitors on your card. You need an actual DisplayPort plus an active adapter (or DP monitor) to run 3 monitors on a single card.
Options: Reply | Quote | Flag / Report